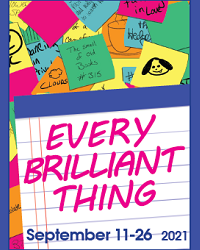 For this performance part of the audience will be seated on the orchestra and stage level of the Arts United Center Stage. If you would like to be seated onstage purchase a ticket using this event.

You’re six years old. Your mother is in the hospital. Dad says she’s “done something stupid.” She finds it hard to be happy. So you start to make a list of everything that’s brilliant about the world. Everything that’s worth living for.

You leave it on her pillow. You know she’s read it because she’s corrected your spelling. Soon, the list will take on a life of its own. This touching and funny one-man, interactive play is a look at depression and the lengths we will go to for those we love.

Todd Frymier has been cast in this one-man show. Todd is no stranger to the stage in Fort Wayne, having been involved in community theatre here for over 35 years. After training at The American Academy of Fine Arts in New York City and Second City in Chicago, Todd came back to the city to raise his family, but remains active in theatre. Memorable musical roles at Civic include Victor Frankenstein in Frankenstein The Musical, Baker in Into The Woods, Billy Flynn in Chicago, Jean Valjean in Les Misérables, Sweeney in Sweeney Todd, and most recently Mr. Wormwood in Matilda. He appeared as Cliff in Civic's 2010 production on Deathtrap.