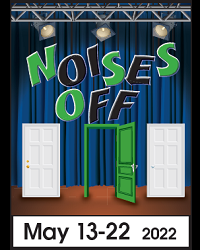 In Noises Off the lights go up on the cast and crew of the fictional bedroom farce Nothing On the night before their opening. During the rehearsal the actors face the usual struggles with entrances, exits and getting props in the right place at the right time.

However, as Noises Off unfolds, the challenges onstage are nothing compared to the drama off stage. Lines, props and pants are dropped as the company struggles with missed cues, fluffed lines, slamming doors, and romantic intrigue.

Featuring the actors who were cast for the planned 2020 production of Noises Off.

Buy Tickets to this Event Directions